A few years ago, I was asked by a friend to “fix” some photos that were taken at a wedding. The bride was lovely, EXCEPT for the big honkin’ tattoo on her upper right arm.  My first (and completely internal) reaction was, “Well, maybe she should have thought of that when she chose that strapless dress!” 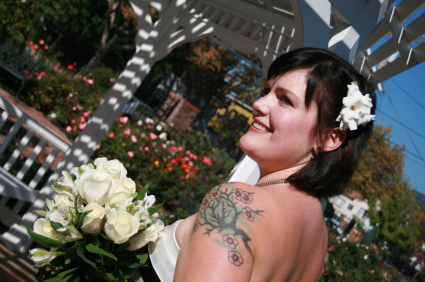 But because he was my friend, I just smiled slightly and said, “I’ll see what I can do.” Several editing hours later (the bride was, of course, in almost every shot), the tattoos were gone without a trace. My friend was happy, the bride was happy – and I was exhausted. It was no small feat to maintain the consistent gradation of skin tone on those upper arms in a pile of photos with varying light.

I had all but forgotten about this until last week, when a reader commented on a recent Scrapper’s Guide Tip of the Week about changing the “temperature” of images.

Cindy wrote: “…it never occurred to me to use it to change how the photo makes you feel. I just thought a person had to keep the photo looking as “true” to the original as possible so this tip helped me get past a huge hurdle in my scrapbooking pages. I will feel more likely to change the photos in the future…”

Which begs the question: When it comes to photo editing, how far can – or in fact, should – we go? Without getting into a deep discussion on the ethics of digital image manipulation (we’ll leave that in the realm of photojournalism, where it belongs), are there any rules of thumb on changing things in our own personal photos, and the ones we publish for public viewing, family gifts or other forms of sharing?

First, consider what it is you feel needs to be changed, and ask yourself, “Am I changing the style of the photo? Or am I changing the content?” These are two vastly different things.

Changing the style would include, say, recoloring someone’s T-shirt to match your background paper; adjusting the hue, tone, temperature or color cast; maybe some creative cropping, background blurring or selective coloring, to bring attention to a certain area of the image.

Changing the content of the image might include replacing a dull, gray sky with one that’s sunny and blue with white fluffy clouds, or adding something to an image that wasn’t part of the original, like a bird in the sky, for instance. Or swapping heads to replace someone in a group shot whose eyes were closed.

We get into sticky territory when we change fundamental elements of an image in an obvious and noticeable way. And who among us hasn’t gone a little bit overboard with the healing brush or the clone tool when we’ve set about to remove wrinkles and sags from an aging face – with only the best of intentions, of course! When we try to turn back the clock just a little too far, it results not only in an artificial look, but one that’s unrealistic as well.

Last year, I was the wedding photographer for a young couple whose wedding budget was pretty slim. I really wanted them to have nice memories of their special day, but there were some challenges in photographing them. The groom was missing a tooth, which was noticeable whenever he smiled – and he was grinning widely that day, as you can imagine. The bride, probably from stress, had a minor acne breakout. In editing their images, it was a simple choice to edit out the zits, but when it came to the groom’s tooth, it was a harder decision.

I had tried, during the course of the day, to position him so that I could shoot from the opposite angle, which would not reveal that gap in his teeth. But in some shots, it was simply unavoidable. After much consideration, I decided to “replace” the missing tooth, as discreetly as possible. In years to come, I thought, would they want to look back at their wedding photos and see smooth skin and a great smile, or would they want to see the opposite? So I went with the more positive outcome. I reasoned that it was well within the realm of possibility that he would at some point get that tooth fixed, anyway, so why not?

Did I do the right thing? I don’t know. All I do know is that my intentions were good, and I wanted this sweet young couple to have a lovely set of memories of their wedding day, without small imperfections and distractions.

So what do you think?  Have you ever set out to minimize a few wrinkles and eliminate a bulge or two on a photo, only to end up with an extreme makeover? How much editing is too much? When does changing the content of an image render it unrealistic, or worse, false?

Let’s hear what you have to say on the subject, either here on the blog or in our Digital Scrapper Forum!