I had a date with James Bond, so why was I wasting time bargain hunting at Chico’s?

One of the most enjoyable kinds of journaling is anecdotal—the interesting stories that give you behind-the-scenes facts, especially the kind that make you grin.

A short anecdote often tells more about you or a loved than straight journaling.

For example, if I simply told what we did on our 29th anniversary, it would remind us of the day, and the photos would add another dimension, but it wouldn’t give a true picture of what really went on.

I would venture to say that future generations will read the anecdotal stories much more readily than straight facts journaling. Use the title to rope your readers in, then keep it snappy and to the point — you’ll have them turning the pages of your scrapbook for more.

So, as Paul Harvey was fond of saying, “Here’s the rest of the story!”

It was our 29th anniversary, and Charlie and I were dressed to kill, having just finished a photo shoot with Rachel Hadiashar. He wore his tux and I wore a deep blue Laura Ashley dress with strappy, bronze heels. 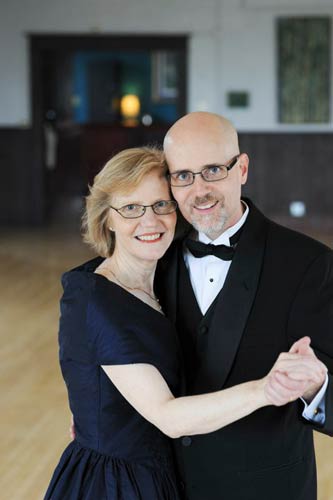 The next stop on the agenda was a late lunch at Limo’s, a restaurant that has been featured in the national magazine The Week as one of the best ethnic restaurants in Portland.

We arrived at 1:58 p.m. only to discover that Sunday hours started at 3:00. Drat! We either had to find another restaurant or kill an hour. Since Chico’s was across the street, we decided to wait it out.

My attendant at Chico’s was very accommodating. She showed Charlie a comfortable sitting area, complete with newspaper, and proceeded to help me find clothes to try on. The hour zipped by while I snagged a couple of bargains for my wardrobe.

In the meantime, another shopper took her 10-year-old son over to the sitting area and matter-of-factly said, “Sit here with James Bond while I shop.” 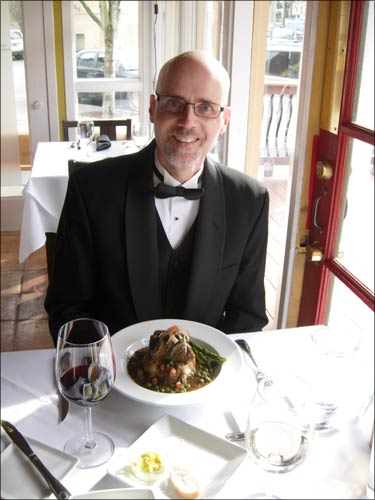 Come to think of it, Charlie DID look a lot like James Bond in a tuxedo. Maybe even better. So why was I wasting time bargain hunting at Chico’s?